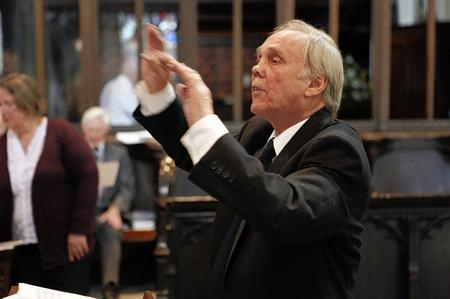 Mark Deller has been the conductor of the Ashford Choral Society since 1970 and from the records is the 10th incumbent. He began his musical career as a chorister at Canterbury Cathedral, and from the King’s School won a choral scholarship to St. John’s College, Cambridge. In 1962 he joined the Deller Consort and made the first of many recordings with them and his father, the celebrated counter tenor Alfred Deller. Since that time he has sung extensively throughout Europe, USA and South America. Mark joined Ashford Choral Society when he returned to Kent on his appointment to the choir of St. Paul’s Cathedral.

During his more than 30 years with the Choral Society Mark Deller, as well as conducting several large choirs in England, has directed the Canterbury and Stour Music Festivals and conducted the Nederlandse Bachvereniging in Holland, Les Choeurs de la Pleiade in Paris, the Associacao de Canto Coral in Rio de Janeiro and the opening concert for Europa Cantat in Belgium amongst others.