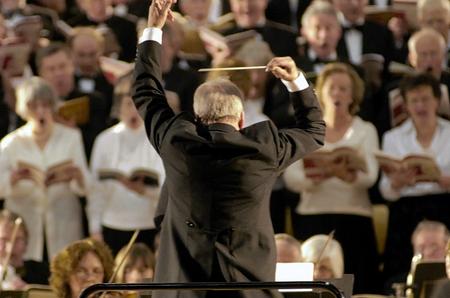 Ashford Choral Society has a membership of some 140 singers and traditionally gives three to four concerts each season, during the period September to April/May. Each year there is an opportunity to perform some of the major works in the choral repertoire together with leading soloists and a professional symphony orchestra. The conductor, Mark Deller, has an international reputation as a choral conductor, working especially with choirs in France, Belgium, Holland, Switzerland and South America.

This autumn we shall be performing Bach’s majestic Mass in B minor, and then after Christmas we shall join forces with a French choir to sing Handel’s Messiah here in Ashford and then again in France, and the season will close with a performance of Michael Tippett’s choral masterpiece A Child of our Time.

Come and join us, either as a performer or member of the audience; and remember, if you’re under 25 it costs you nothing at all to become a member of the Society!

Ashford Choral Society is a member of the National Association of Choirs and the Ashford Federation of Arts.